The modern "accepted" name for the tree onion is Allium cepa var. proliferum which essentially translates as prolific onion

The BULBIFEROUS GARLICK, Given by Dr. Daniel Whistler. So called, because in the place of Seed it bears Bulbs at the top of a Stalk. Described by Baubinus (a) with the Name of Allium proliferum: although Bulbiferum, be more apposite; for that every Plant which bears Seed is proliferous; the Seed being Plantae Proles, or the Foetus of a Plant, The Bulbs (not fully described) are about twenty; in a round Head or Cluster as big as a Nutmeg; each Bulb equal to a middling Pea; consisteth of four or five shells; of which, the outermost is shrunk up to a dry Skin, on one side, of a purplish colour; the inmost incloseth that little Particle which in time becomes another bulbiferous Stalk, with a Root

He was born in Oxfordshire and by 1639 had been admitted to study at Merton college, Oxford and took a degree in arts before travelling to Holland to study as a "physic" becoming a doctor of medicine in 1645 with his dissertation becoming one of the earliest works covering "Rickets" (a condition affecting bone development and often associated with a lack of calcium and vitamin D)

By 1649 he was a fellow of the Royal College of Physicians. It seems he was employed at some time by the admiralty. It is not certain if the naming of the "bulbiferous garlick" attributed to him was a plant he, himself, collected while overseas, perhaps, studying in Holland but this could certainly be one of the first tree onions in the UK

He died in May 1684 under a cloud. It seems he was quite well liked in society, and known to one of his more famous contemporaries; Dr Samuel Pepys. Unfortunately, he used his charm and intelligence to abuse his position of authority and trust. He acquired money by deception and despite a successful medical practice died in debt 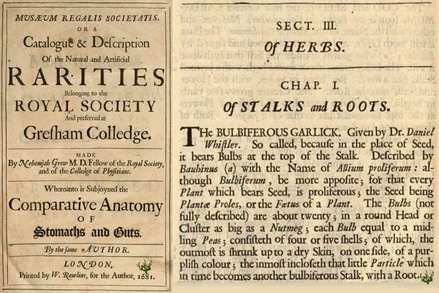 Allium Proliferum (1681)
I believe this is one of the very first references to the tree onion in the UK, although it is described as "bulbiferous garlick"
To put in context - This is just 15 Years after the Great Fire of London 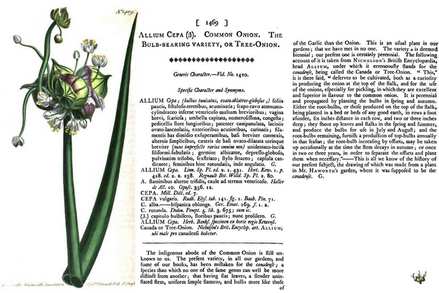